Thunderstorm Preparedness; How to Be Prepared

Thunderstorm Preparedness; How to Be Prepared 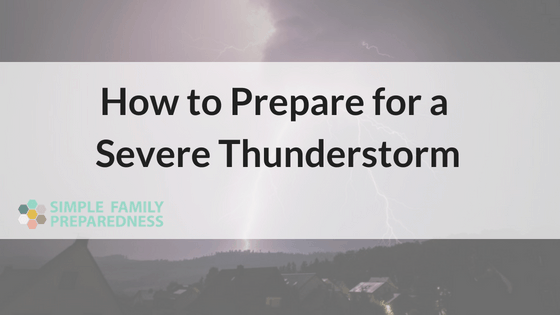 Thunderstorms are the awe of many people. Others are scared of the giant thunderclaps. However, most people don’t take a severe thunderstorm as a serious situation. When we hear that a severe thunderstorm is imminent, a lot of people scoff. It just doesn’t have the same fear factor as an inbound hurricane or the aftermath of a major earthquake.

Thunderstorm preparedness isn’t something we keep in the front of our mind. It should be thought about though, as unlike a lot of storm types, severe thunderstorms can strike any corner of the country at any time.

In this article, we will examine severe thunderstorms, and the damage they can bring with them. We will also tell you some essential steps for thunderstorm preparedness, during the storm and after the storm has passed.

Knowing what to do in all three stages could protect you and your family as well as keeping you alive in the aftermath.

What is a Severe Thunderstorm? 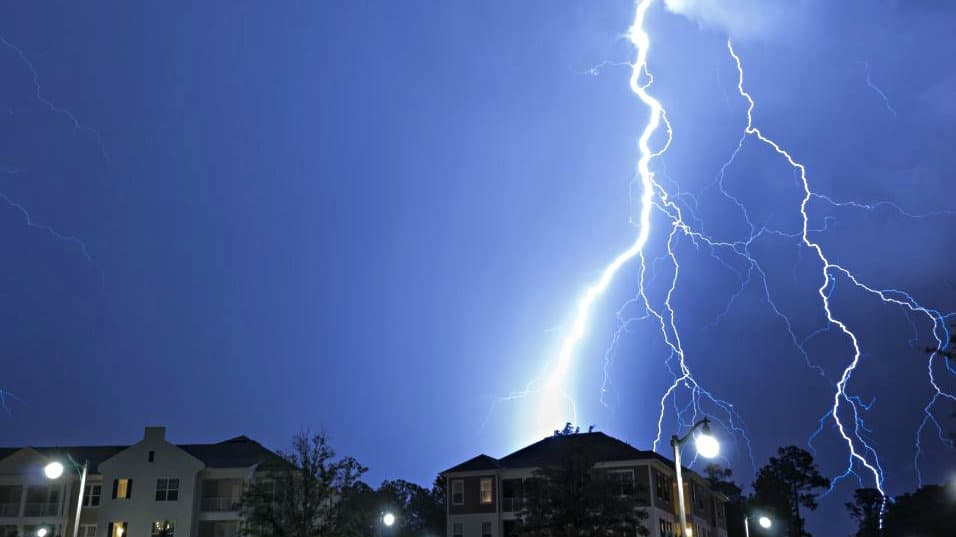 A thunderstorm is a weather system that produces rain, thunder, and lightning. Although the rain doesn’t always hit the ground (called dry thunderstorms, where the rain evaporates before landfall), thunderstorms always produce lightning, which kills over 50 people every year in the United States.

A severe thunderstorm is a thunderstorm that produces large hail, flash flooding or has winds over 58 miles per hour and can or does produce tornadoes.

Severe thunderstorms usually don’t last very long. However, they can produce flooding in as little as half an hour, appear in line with other thunderstorms and can occur in giant clusters that linger for long hours. It is important to learn the basics of thunderstorm preparedness to know what to do during this circumstances.

Your physical location when a severe thunderstorm strikes, is crucial. While we can predict where a thunderstorm is likely, the severity of the thunderstorm and its duration, aren’t easily identifiable.

If you are on water when a thunderstorm strikes you should immediately make landfall and get to the ground. If you are outdoors and in a wooded area, you should find cover in a grouping of trees that are lower to the ground then those surrounding them.

The trees will protect you from damaging rain or hail, and the lower trees are less likely to be struck by lightning. If possible, you should get indoors.

If you are outdoors and in an open area, you should find the lowest point, such as a ravine or ditch, and get in it. Being as low as possible will help prevent a lightning strike. However, being in the low area also makes you susceptible to being in the first area to get flooded. Stay alert and make it to an indoor and safe area when possible.

If a vehicle is the only safe place, you should get in the back seat, and lay as flat as possible to shield from broken glass. Keep your body, especially exposed areas of skin or those only protected by clothing, from touching anything metal on the car.

When possible, remain indoors away from doors and windows, or other points of entry to prevent injury from splintered wood, broken glass, or flying debris.

What Steps Should be Taken Ahead of Time 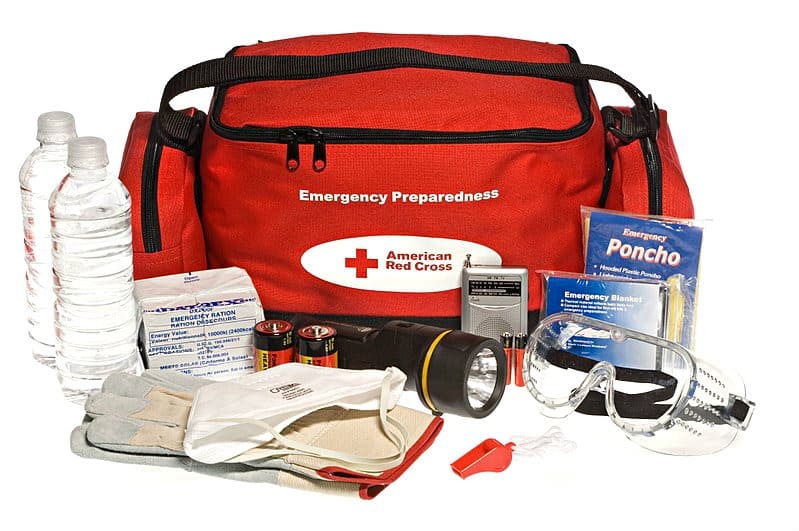 Prior to a severe thunderstorm strike, you should prepare yourself and your family. Create an emergency kit that contains first aid equipment such as bandages, ointments and pain medications.

You should also have an emergency pantry for food,water, and other supplies. You may need portable heaters or fans, battery-operated radios, and of course, batteries.

Food supplies should be rotated and checked for expiration, and you should maintain a method of opening the cans with the food supplies. Water should be bottled and unopened in the event of a power outage or loss of running water.

Candles, and blankets along with extra pillows, and changes of clothing should also be stored in the pantry. Keeping everything in one place will eliminate the need to search for individual items later on or during the storm.

Blankets, clothing, and other items that are susceptible to rain and damage should be in sealed, watertight containers, such as vacuum bags or plastic totes.

If you have time prior to the storm reaching your area, you should board up windows, or at a minimum, place large “X’s” of masking tape across them. This will help prevent the glass from shattering, should it break during the storm.

Unplug all electrical devices possible, including stoves, televisions, electronics, and refrigerators. In the event of electrical surges, these appliances and electronics could spark, blow, or otherwise be damaged.

You should close all interior doors and move your emergency belongings and family, to the most central part of the home on the lowest level. A ground floor hallway with all doors leading to it closed is the ideal situation.

The second option would be the bathroom, and if there is a tornado, you should get into the bathtub. Protecting yourself and your family is the top priority. Ensuring there is enough food and water, as well as blankets and dry clothing is crucial.

You should make sure you have enough stocked to last all persons for three days. If you have the time and storage to get more, that is better. However, a minimum of three days supplies should be sufficient for most severe thunderstorms.

If you are in a flood-prone area or fear that flash flooding could cause damage or enter the home, you can use sandbags to blockade doorways and entry points. These can be purchased or made yourself.

What to Do During the Storm

While the storm is underway, you should remain in the safest possible location. You should always stay away from doors, windows, or other areas that may break or splinter during the storm.

You should never open a door, or go outside during the storm, or anytime shortly after, as lightning can strike anywhere at any time. Even if the rain itself isn’t enough to cause flooding, the wind can still be strong enough to throw debris your direction or spawn a tornado.

You should make your safety area as comfortable as possible with bedding, blankets, pillows or paddings. You can bring couch cushions with you to the hallway, or bathroom easier than a mattress.

Thunderstorm preparedness: do not attempt to cook or use electronics during the storm. Doing so can cause injury, fire, or other conditions that can be hazardous to your health and safety.

Once the worst part of the storm has passed, you should tune a battery powered radio to a weather station to get the latest updates. Once the storm is reported as being over, you can exit the safety area and begin the aftermath inspection. 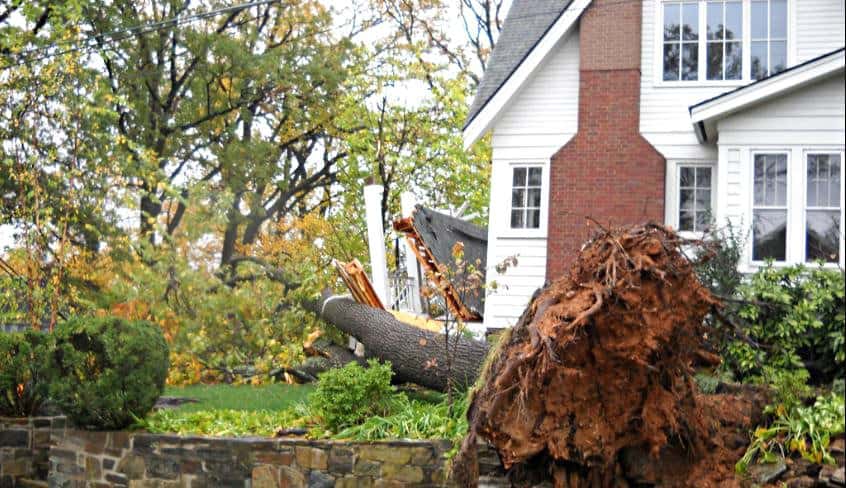 As the storm ends, you will need to assess the safety and integrity of your home and surroundings. The first thing you should check is yourself, and family members for any injuries sustained during the storm.

Next, you should slowly and carefully open doors, and check the surrounding rooms one at a time, expanding your search through the entire home. Open doors carefully in case there is damage, broken glass, or collapsed ceilings.

Once everything has been verified as undamaged, is in working order and safe from future damage (such as a broken tree limb that may fall hours later), you can restore your home to its’ previous conditions.

Remove the tape or boards from the windows, plug in appliances and check for electrical and water service and begin the external clean up.

Severe thunderstorms can be a dangerous situation. Even if the thought of loud thunder and heavy rain aren’t immediately threatening, severe storms bring with them lightning, flash flooding and the potential for large hail, and even tornadoes. Thunderstorm preparedness is the key to staying safe.

Follow and comply with severe thunderstorm warnings, and take the necessary steps to ensure the safety of not only yourself but your family as well.

Have emergency kits ready to go, including medical supplies, food, and fresh water in sealed bottles. You should also have blankets, batteries, and battery-powered items such as radios, flashlights, and fans ready.

Keep yourself and your family safe, by inspecting everything for damage before restoration, and you should easily survive the threats of the storm